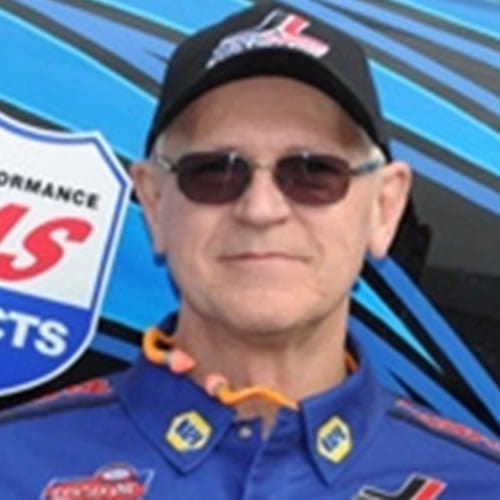 Les Davenport was born into a family of mechanics, welders, and sawmill operators, so it was no surprise that his early interest in race cars later became a career. When he was 18, he built his first race car, a 1951 Ford Prefect with a 337-inch Chevrolet motor. Davenport constructed numerous hot rods and race cars. However, in 1976, he discovered his true passion – supercharged alcohol motors. He remained committed to this newfound passion, apart from dabbling into the nitro ranks. In the late 1970’s and early 80’s, Davenport spent his summers on the road, racing professionally in alcohol funny cars and dragsters. In 1982, he won Pro Comp at the Mile-High Nationals in Denver, the only NHRA National event that he won as a driver. After selling off his race car operation in 1984, he started Davenport Machine Services in Calgary, where he consulted as a tuner and crew chief for several customers with blown alcohol race cars, which he continues to this day.

In 1990, Les Davenport started driving land speed cars at the Bonneville Salt Flats, Utah, where he is a lifetime member at the Bonneville 300 MPH Club, as well as the Dry Lake Racers Australia 300 MPH Club. He is currently the driver of the Target550 streamliner, a twin engine streamliner with approximately 4000 horsepower, designed to hit over 500 MPH.

In 2010, in partnership with Jirka Caplan of Calgary, Davenport built a new front engine Nostalgia A/Fuel Dragster. With Les driving, they became one of the premier cars in the category, winning the Bakersfield March Meet and the California Hot Rod Reunion. In 2014, with his son, Ryan, driving, they won the NHRA Nostalgia A/Fuel Dragster points championship. In the last 35 years, Les has won 25 NHRA National events as tuner/crew chief with 14 different drivers. He has also won more than 60 divisional/regional NHRA races. In 2004, as the tuner for Cy Chesterman’s Coca-Cola funny car, he won the NHRA Top Alcohol Funny world championship series. Currently, Les Davenport is the crew chief for the Jackson/Lombardo NAPA sponsored Alcohol Funny Car, driven by John Lombardo Jr. Davenport has set a variety of fastest speed records throughout the course of his career, and doesn’t plan to slow down; he continues to follow his passion to this day.