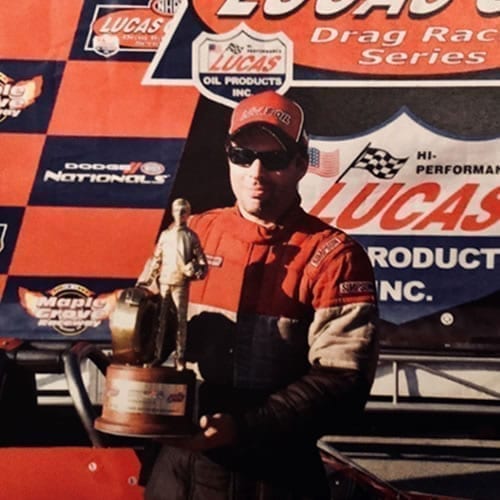 In 1992, at the age of 16, Jeff Veale began his racing career at his hometown track in Cayuga. Jeff and his father, Gary, built a unique 1932 Chevy Coupe, which Jeff Veale raced in the sportsman bracket class. In his rookie start, Jeff managed to complete the season, finishing 6th in the points series. He also won rookie of the year for his outstanding accomplishments.

The following season, Jeff moved up a class, earned his 9.90 license, and began to drive his dad’s 1966 Chevy II in the super pro class. In 1994, Jeff and Gary constructed a new blown alcohol dragster, which was to debut the next season. Come 1995, Jeff was behind the wheel of the top alcohol dragster and earned his license for the category. He gained experience by running match races, running quick 8 races in his Super Mario jet funny car, and UDRA events. Since 1995, Jeff Veale has been competing in the top alcohol dragsters class. In 1999, he ran with the NHRA, and made the change to injected nitro in 2008. Jeff Veale was a crew member for 5-time champion Bill Riechert for several seasons. Jeff set top speeds at various events that he attended. In 2014, Jeff won the NHRA regional event in the Lucas Oil series at Virginia Motorsports Park, followed by a 2017 win at the NHRA National event at Dodge Nationals, in Reading, PA.