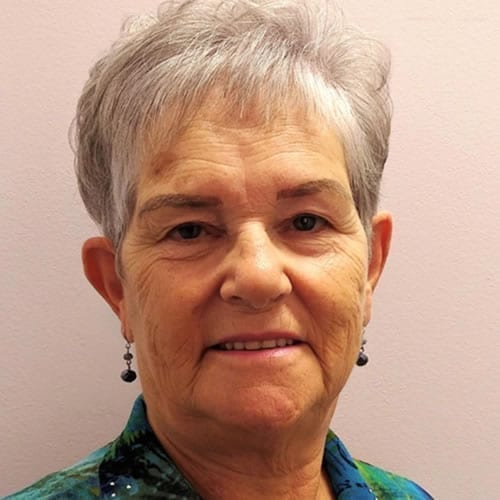 Wife, mother, grandmother, and great-grandmother of a drag racing family.

Drag racing became a part of Edie Mountjoy’s life as a teenager; in 1960, she attended her first race with her car enthusiast boyfriend, at the Kohler Dragway, in Cayuga, Ontario. From then on, the Mountjoy family were heavily invested in the sport. Between the 1960’s and the 2000’s, the Mountjoy’s campaigned front and rear-engine dragsters at tracks located in Ontario, Quebec, and the US. In 1994, they set an IHRA record with their C Dragster at Thompson, Ohio.

Edie Mountjoy joined The Drag Racing Association of Women during one of her trips to the US Nationals in Indianapolis. DRAW is an organization run from the businesses and homes of the volunteers; racers, fans, sponsors, manufacturers, and team and track owners alike, were all welcome in the association. When Edie found out that DRAW was dedicated to the emotional and financial support of injured racers and their families, she devoted years of her time to the organization. One of the notable racers that Mountjoy helped was Tom Brown from Michigan, who had been badly burned in a Jet Funny Car at Cayuga.

Mountjoy became a track rep for three tracks in Ontario: Cayuga, St. Thomas, and Grand Bend. She encouraged track owners across Canada to participate in DRAW; soon, DRAW booths were a common sight from Ontario to Mission BC. She quickly became the Area Coordinator for Canada, as her family continued to race. In the early 90’s, Edie Mountjoy ran for the board of directors, and secured a position as an alternate. She remained on the board for many years, filling the duties of Secretary, Vice-President, and was elected the first Canadian President in 1999-2000. From fundraising to 50/50 draws and auctions, Edie honourably raised thousands of dollars towards drag racers with medical expenses.

To this day, Edie still finds the time to be a roving representative. She informs the Board of Directors of reported incidents and helps secure financial aid for injured drag racers and pit crew members. DRAW has helped more than 927 injured racers and their families. Her volunteer job turned into not only a lifetime dedication, but a true passion.