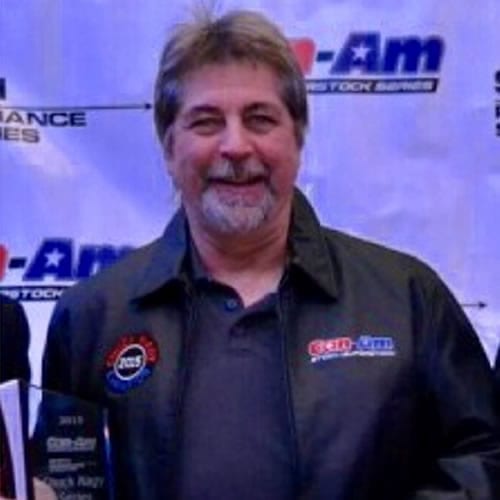 Chuck Nagy began his drag racing career in 1973 – and has competed every year to date. This versatile racer has made over 10,000 passes in a wide variety of vehicles, including door cars, dragsters, altereds, trucks, and even motorcycles. Nagy initially honed his skills in the bracket racing category, amassing 7 points championships, before setting his sights on the class racing arena. He collected 7 IHRA and 3 NHRA national records.

Still, Nagy was not yet satisfied with these results. In 2002, he became a champion at the Epping NH IHRA national event in Modified Eliminator. Chuck Nagy continued to collect titles; he became the 2004 IHRA world finals super stock eliminator champion, followed by the 2005 IHRA Canadian Nationals title in super stock eliminator. Nagy wrapped up the super stock title at the IHRA national event at Toronto Motorsports Park in 2006.

For the next few years, Chuck Nagy decided to race closer to home. He garnered the Can-Am Stock/Superstock series championship in 2015. Nagy continued his winning streak, taking first in in the 2016 John Scotti – CDRHF Shootout, part of the Division 1 NHRA national open at Toronto Motorsports Park.

In 2017, Chuck Nagy raced at 10 different tracks, and was selected as the Stock-Superstock representative for Team Ontario as they competed against 26 different states in the all-state challenge in Memphis, Tennessee.

What is Chuck up to now? He is currently building vehicle number 12, a 1968 superstock Corvette in hopes to continue his legacy.