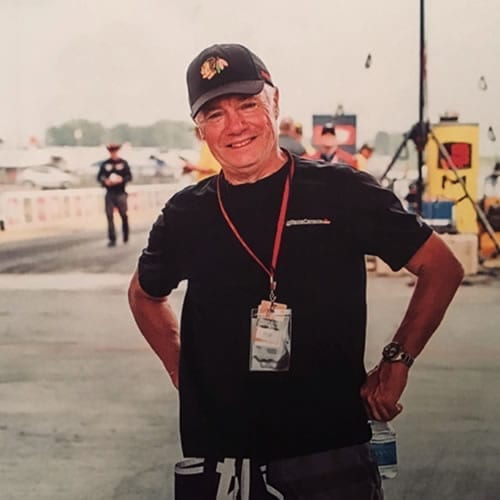 Bruce Biegler came from humble beginnings; in 1974, he worked as the track photographer and reporter at Saskatoon International Raceway. In parallel to a 34-year profession as a Marketing Manager with Canadian Pacific Railway, was an extreme interest and devotion to the sport of drag racing. Biegler started off as a photographer, reporter and columnist for the National Dragster and Wheelspin News, which included the Canadian Quarterly for the National Dragster, and Straight Talk, for Wheelspin News.

Over the years, Biegler worked hard to bring us the best coverage of drag racing on the internet, both at home in Canada, and when travelling on the National event trail. Biegler had extensive editorial and photographic involvement with many other drag racing publications, including industry majors like Popular Hot Rodding and Hot Rod Magazine.

He was awarded winner of the IHRA Media of the Year in both 1992 and 1997. Biegler went on to work as an editor at Performance Racing News (1989-2008), at Inside Track Magazine (2009-2014), as well as a Contributing Editor for over 30 years to Chrysler’s official Factory Publication – Mopar Magazine. He was also a columnist to Mopar Muscle Magazine from 2002-2007, and a Contributing Editor to Camaro Performance Magazine from 2011-2014.

In 2015, Bruce Biegler became, and remains, a Senior Contributing Editor to Chevy High Performance magazine, and Chevy online. However, Bruce Biegler’s greatest accomplishment was the founding, managing, and editing of Canada’s most reputed and visited website for drag racing: DragRaceCanada. Biegler started this endeavor in January 1999 and is proud to say that it has endured as the undisputed #1 source for Canadian drag racing today.