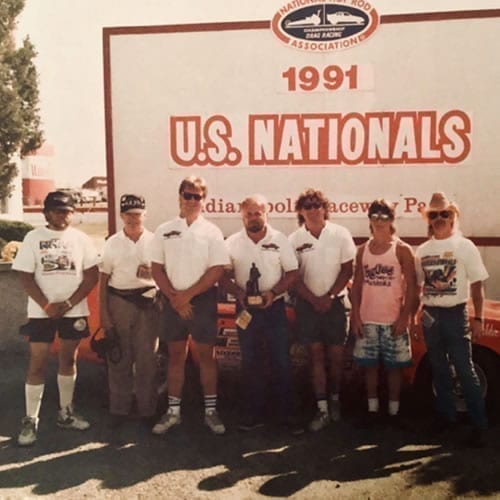 Briane’s drag racing journey began in 1964, when he entered a race at Niagara Dragway with his 1962 Ford 390 three sped overdrive. He continued to explore his love for racing with a 1957 Corvette in modified sports, a 1957 two-door Chevrolet Coupe with fuel injection in D/S stick, and a 1964 Impala 300 HP standard. He competed in F/SA locally for three years in Niagara, Cayuga, and Acton, with his 1968 Oldsmobile W30. Briane also competed on a National scale in Indy, Gators, and Dallas.

In 1973, Briane took a hiatus from racing, and instead travelled to various shows with his 1953 Mercury Monarch, which was powered by a 1957 Cadillac engine. Briane won various awards at NSRA meets, including first place in Memphis, Tennessee, in 1980. In 1988, he acquired a 1975 Chevrolet Monza 262 V-8 automatic, which he purchased from Don Quinn in New Jersey.

Briane has raced for 38 years and has garnered a variety of accomplishments. These comprise of 23 NHRA class wins, including 5 at the US Nationals in 1989, 1990, 1991, 1995, and 1997, as well as two in Sanair in 1989 and 1992. He won the 2003 IHRA Division 1 race in Beaver Springs, Pennsylvania, in Stock Eliminator. In addition to these achievements, Briane has acquired 21 NHRA record certificates with a total of 42 ET and MPH records set in both the ¼ mile and the 1/8 mile. He has set records in both stick and automatic classes, including Q/SA, R/SA, T/SA, R/S and T/S. His most recent records were set in Napierville, Quebec and Miramichi, New Brunswick in July 2018.

Briane’s passion for drag racing allowed him to travel through numerous towns and cities across Canada and the United States, meeting many friends along the way. He has been retired for over 10 years, after dedicating 42 years of his life to General Motors of Canada as a pipefitter in the St. Catharines, Ontario location. Today, he still races his 1975 Chevy Hatchback, keeping the dream alive.