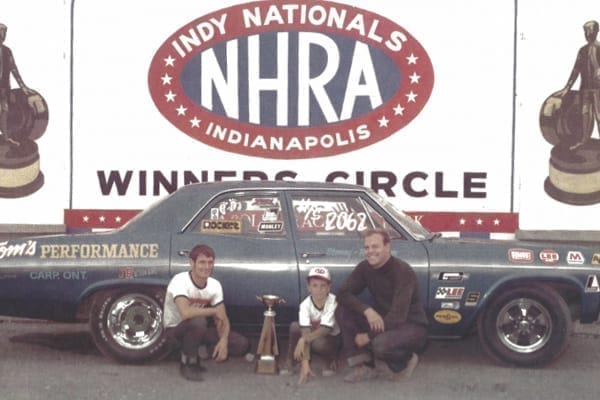 Won Stock eliminator at the U.S.Nationals & Winner of the Summer Nationals at Englishtown

Like many drag racers, Richard Jones’ drag racing career started in the “Golden Age of Drag Racing.” His first drag car was a 65 Pontiac where he had a few years of moderate success. Looking for a faster car, Jones bought a new 1969 Z-28 Camero from Lefley Auto in Rockland, Ontario. He rebuilt the motor, put in 5:13 gears and seven inch slicks on the back. He raced this car throughout the region in Napierville, Pont Rouge, Luskville, Cedars and Two Mountains Dragway. It was at the end of this summer, where a friend of his suggested that he purchase a less expensive lower class car. Jones sold the Pontiac and purchased a 1961 Chevy 9 Pass Station Wagon. Jones raced the Chevy across the country but had little success. According to Jones, even though he lost, he still had fun simply taking part in the races.

In the summer of 1972, Tom and Ray Ariel, fellow drag racers and himself, purchased a 1966 Chevy. They raced this car at Points Meets in Division I and won at the meet at Cauga. They went on to win Nationals at Indy, and at the Eliminators. After these successful races, Jones and the Ariel brothers were invited to the World Finals in Amarilo, Texas, finishing behind Dave Benesik.