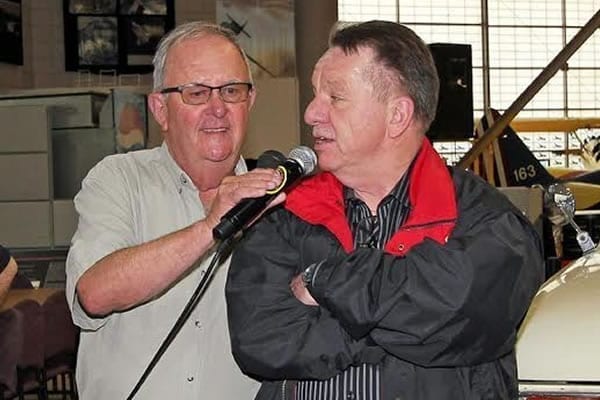 Norm Noddle’s interest in Drag Racing began in 1960 at the age of 14 when he attended “the drags” in Cayuga with his older brother. By 1965, he was a regular racer in the N/Stock with his 1962 Studebaker wagon. While he had some success, the desire to go faster grew and he acquired fellow dragster Dennis Warner’s Bullet C/A with Hemi power. Noddle raced the Bullet with both a top and as a roadster and placed 6th in the Molson Golden Wheels series at TID.

During the same time, he began to work at the Toronto International Dragway first in tech and the staging lanes, and later as the track announcer. From 1975 to 1985, Norm became Cayuga’s track announcer, announcing weekly shows including three NHRA points races (1978-80).

His racing success and accomplishments came as follows:

Further to being just a racer and announcer, Norm is always trying to promote the sport in a positive light, including over 30 Displays at Sunoco and PI locations in Ontario and Quebec. Over the years, Noddle and his car have appeared on City TV, Global and CBC promoting NHRA events at Cayuga. In the early 1990s, Noddle helped create six shows that were broadcasted on TSN and provided race cars for various TV Shows and commercials such as, “Thrill of a Lifetime” and “Pizzaz.”

Due to his extensive knowledge of the sport, Noddle has acted as MC and Announcer for numerous Dragway Park press conferences, Trade Shows, open house events and as speaker for numerous functions. He has also written articles on the sport for Wheelspin News, Dragway Park News, Buy and Sell, etc.