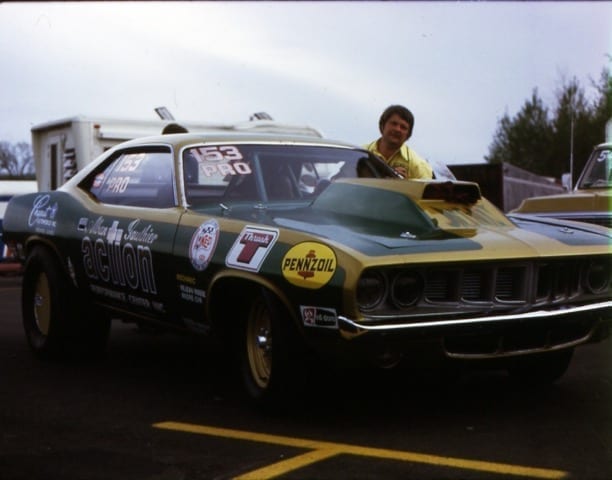 Alban Gauthier started his drag racing career in 1965, competing in the Sportsman Class until 1970.

In 1969, he set the record at the WCS in Cayuga, Ontario with his Ford Shelby 1969. From 1970 to 1992, Gauthier raced in the Pro-Stock class, (following the NHRA national events) with top names like Bill Jenkins, Bob Glidden, and Warren Johnson. In 1972, he won the WCS against Carmen Rotunda at the Sanair track in Québec, with a ‘Cuda. From 1972 to 1983, Gauthier was racing with Chrysler. Dennis Warner built his engine, and Don Ness, Willie Rell and Don Hardy built his Pro-Stock cars.

In 1984, Alban Gauthier had a serious accident at 180 mph at the Keystone National in Maple Grove, Pennsylvania. Luckily, he was not injured.

In the last two years of his racing career, Gauthier was racing a Pontiac Grand Prix, and qualifying at every national event. He was on the same team as Jerry Eckman, and his engine builder was Dale Eike in Colombus Ohio.

Alban Gauthier ended his career in the fall of 1992 at the race in Topeka, Kansas.