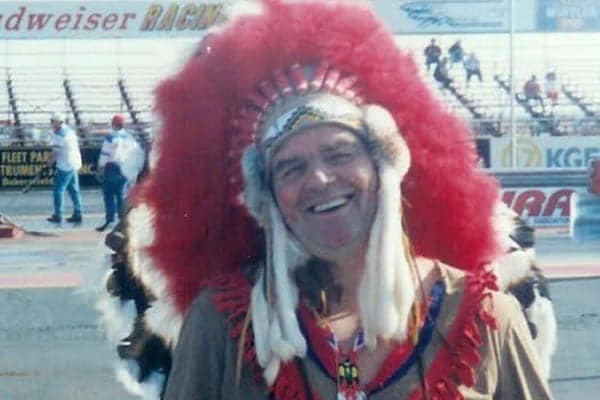 In Memory of Bob Beazer

We are deeply saddened to announce the passing of Robert (Bob) Gordon Beazer, on January 2nd, 2023, at Napanee General Hospital. Known in the industry as “The Official NHRA (NO) Rain Dancer”, Bob Beazer was a welcome sight at drag strips in the 60s and 70s. Equipped with his colourful headdress, Beazer would perform a dance at the starting line before many NHRA events. He became a staple in the community, and his radiant energy brought both joy to the crowd, and blue skies above.

During the late 1950s in Ontario, Beazer was a member of the “Peaceful Pacers.” Throughout their excursions to Detroit-area drag facilities, the local racers would refer to the Canadian drag racers as “a bunch of Indians.” True to his heritage, Beazer decided to live up to their perception and sported his traditional dress. He was dubbed the “Canadian Indian” and was subsequently hired by the NHRA to perform his no-rain dance.

Beazer was an avid car enthusiast; he was inducted into the Canadian Drag Racing Hall of Fame in 2016. Not only was he the official NHRA (NO) Rain Dancer, but he was also the proud owner and driver of the “1st Gasser”, lovingly referred to as the “Canadian Indian 41 Willys.” His friends recount many nights spent at the Beazer household, which was tastefully decorated with race car parts – such as a 4-speed transmission in the bathroom! To this day, one of Beazer’s cars lives on in Chippawa, Ontario.

He leaves behind an adoring family, and is remembered with love by his wife of 59 years, Joan Beazer, his sister Joanne Dewar, and his brothers Ronald, Bill, and Bryan. He was a dear father to Linda Beazer-Allen, Wendy Beazer, Leslie Jeffryes, Bobby Beazer, and Bill Beazer, and a grandfather to 13 grandchildren, 25 great-grandchildren, and 13 great-great-grandchildren. He will be missed by his sister, SusaBelle Beazer, as well as his nieces, nephews, and an abundance of friends.

Bob Beazer was many things: a car lover, a family man, a great friend, and a good omen – as he danced to keep the rain away from the races. The Canadian Drag Racing Hall of Fame is honoured to have Bob Beazer as one of our inductees. May there be many sunny days at the track in memory of Bob Beazer.