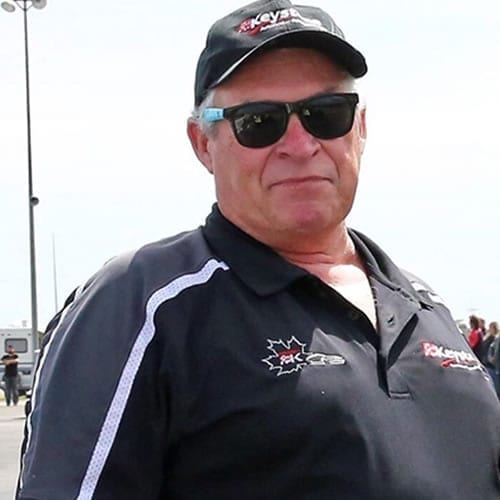 Peter Mac Ritchie’s interest in drag racing first began in his late teens, while he was reading Canada’s motorsport paper: Wheelspin News. Peter spent much of his time at a new performance shop close to his home in North Toronto, where he took a liking to an NHRA record holding super stock 1968 Camaro, sponsored by Belmont Chevrolet Dealership. He began working odd jobs for the shop’s owner, Lance. Throughout the summer of 1969, Peter travelled with Lance, codriving the ramp truck to various Winston Points Meets and national events. They began to convert the super stocker to the new pro stock class for 1970.

After attending community college in auto mechanics, Peter was hired by a performance shop in Scarborough, Ontario, doing muscle car hop ups. Peter purchased a 1965 Chevelle and travelled to several points meets where he set the SS/MA super stock record twice. In 1978, at the Molson Grandnationals, Peter joined forces with a racer named Herb Kutz; they decided to run all the 1979 Division 1 points races as well as some national events. The yearly result was 2 more ET/MPH national records, and the Division 1 super stock championship title. Peter and Herb ran a few races together, but ultimately parted ways in 1980. He ran the Chevelle for himself, before selling it 1982. In the 1990’s, Peter drove a couple of locally owned super stockers in the FJ Smith promoted Can AM stock/superstock series around Ontario.

Today, Peter remains a fan of the sport, and is an avid follower on the Can Am Series.