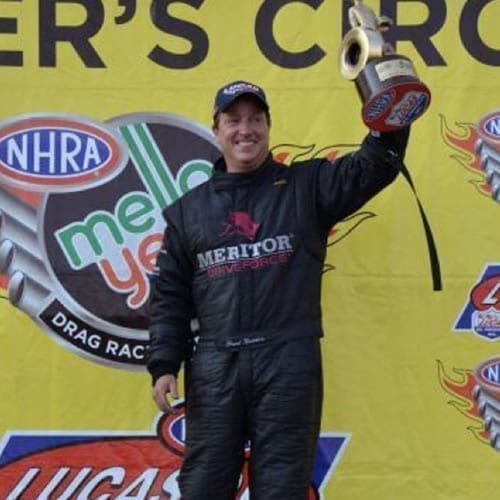 At just six weeks old, Paul Noakes’ father would take him to the track, immersing his son in the high-octane world of racing. Over the years, a passion emerged, as well as a need for speed, and an intense drive to succeed. Noakes obtained his first professional drag racing license at the age of 18. Throughout his career, Noakes focused on Top Alcohol Funny Cars, while working as a mechanic.

Paul Noakes has won the UDRA championship in 1966, as well as 6 IHRA Top Alcohol Funny Car Nationals (2006-2008) placing 2nd in 2008 in the IHRA Championships. During the high-profile years of the IHRA, under Bill Bader and a sponsorship from Hooters, Noakes went to the Nitro-Jam National Event finals, a total of 9 times, and won 4. In 2008, he was the runner-up in the TAFC IHRA World Championship.

In 2013, he won his first NHRA National event with his funny car in Reading, PA. Noakes has competed in several events after being licenced as a Top Fuel Dragster. Come 2014 and 2015, Noakes found himself in several NHRA semi-final rounds, and was the winner of a divisional race in Columbus, Ohio. His team also won Best Appearing Crew at the US Nationals in 2012 and was number one qualifier at Indy in 2014. In 2016, Paul received the right to represent Division 3 at Jeg’s Allstar Race in Chicago, Illinois, against the best in North America, and was named the winner.

Paul Noakes has been racing for over 30 years and continues to show an enormous amount of passion in all that he does. He still drives his Top Alcohol Funny Car whenever the opportunity arises. Noakes currently works as a Transportation Technology High School teacher in London, Ontario, where he won the Fanshaw College Distinguished Alumni Award for Technology in 2014. Dedicated to his family, his community, and the sport of drag racing, he has also attained the Canadian Professional Drag Racer of the Year Award, presented by Drag Race Canada Magazine. He has even taken a few of his graduate students and continued their automotive careers by teaching them while working on his own race car.